Cocoa Beach has seen an increase in development as the space program in Cape Canaveral has grown, the once bustling cruise industry served as its gateway, and its 72 miles of coastline continues to be known for its surf. After acquiring the Quality Inn at Cocoa Beach, a Choice Hotel Brand, the ownership debated leaving the trusted brand or embarking into a new concept based on their Surf and Sand in Pensacola, FL. With an almost 9% anticipated job growth market, the ownership ventured into a stand-alone brand, and The Beachside Hotel and Suites was born. Baker Barrios lead the renovation of the interior public areas and three buildings of guestrooms; the overall property was also being upgraded to feature a lazy river and exterior amenities. 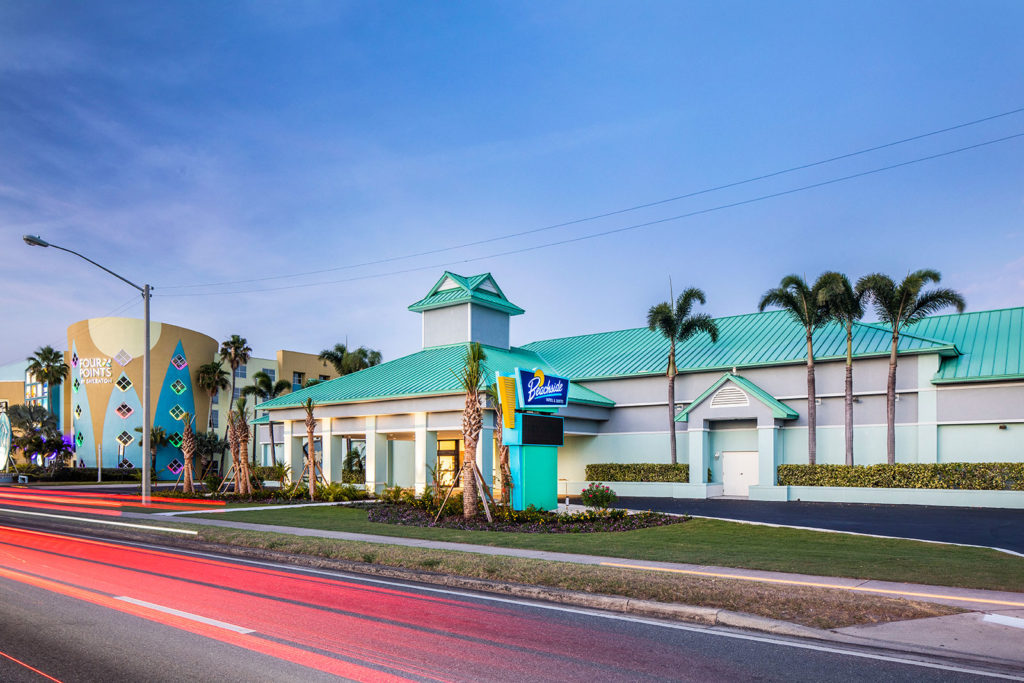 The three guestroom buildings were previously constructed in three phases between the 1960s to the 1990s, each building featured their own unique characteristics and had undergone inconsistent renovations. Conducting an audit of existing kitchenette millwork and FF&E, Baker Barrios analyzed the detailed budget provided by the ownership, which broke down the items in which they would repair, replace, or keep. The history of the hotel and the eclectic furnishings which were to remain inspired the team to explore the midcentury roots, to celebrate the motel style layout, and to embrace free spirited boho beach vibes. With the existing parameters, the design team felt that more could be done with the allocated guestroom funds.

The hotel’s main demographics included families on a budget, “spring breakers”, retirees, or short-term guests that took advantage of the proximity to the cruise lines. All these vacationers were looking for relaxation and fun at the beach, however, the guestroom was suited for business clientele. The rooms were painted in a soft yellow with a mint green accent wall, which made the rooms feel small and dark.  The BBA team was instructed to keep the mint green wall and existing dark teak drapery. So, a bright, warm white was specified to brighten up the guestroom and set the tone for an updated and clean feeling. The art budget was reallocated for new wall accent paint of contemporary geometric patterns, while the surfboard inspired headboards also established the citrus color story. Part of the budget given was to replace the existing office style task chair and desk, and given the cost of these two items, the design team collaborated and discussed how to better approach this traditional guestroom amenity. Instead of one expensive task chair, the funds were broken to purchase two counter height barstools with a bright yellow plastic seat, situated against a counter height table to perch with a laptop or tablet. 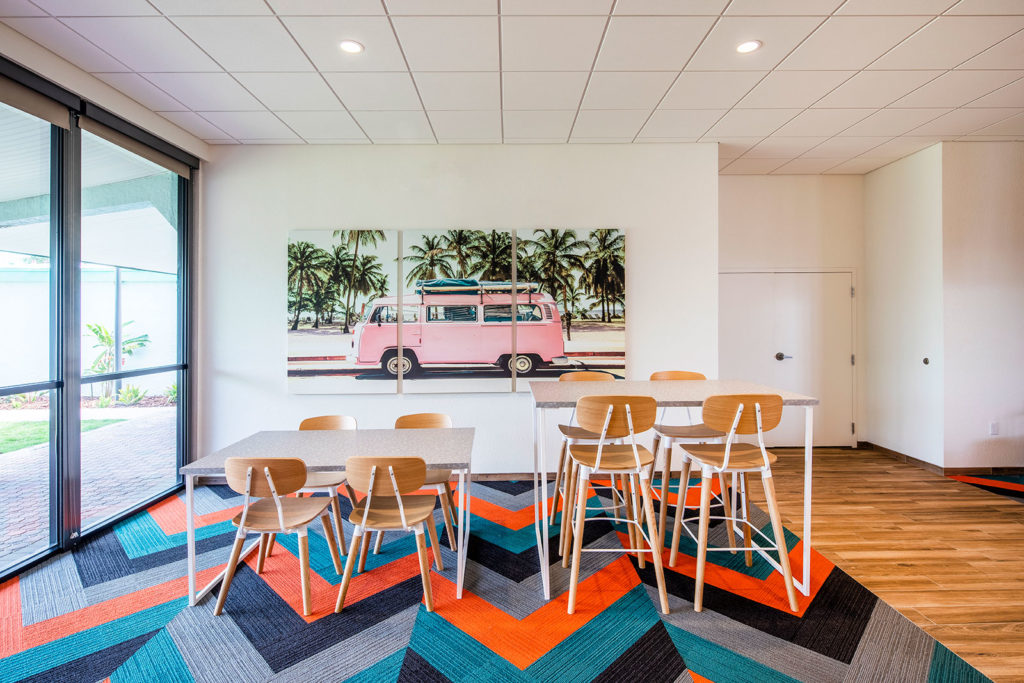 Cleanability, durability, flexibility, and moisture were always at the forefront of consideration, preparing for wet towels, swimsuits, sand, and young guests. The casegoods were designed to not incorporate hardware so that beverages were not opened on the pieces (a designated bottle opener was provided), boat cleats were installed next to the entry door for bag and towel storage, and slat walls were installed in place of the armoire to create more open space at the bathroom entry while providing visible storage. The suites which featured sleeper sofas were upholstered in a vinyl to prevent staining and were accented by pillows featuring rocket ships, paying homage to the space program. By closely watching the FF&E budget and collaborating with ownership, lamps and sconces which were not originally budgeted for were able to be replaced. The guestrooms now offer visitors a contemporary and clean stay, where their own budgeted vacation funds can stretch further, offering less stress as they relax beachside or along the lazy river.